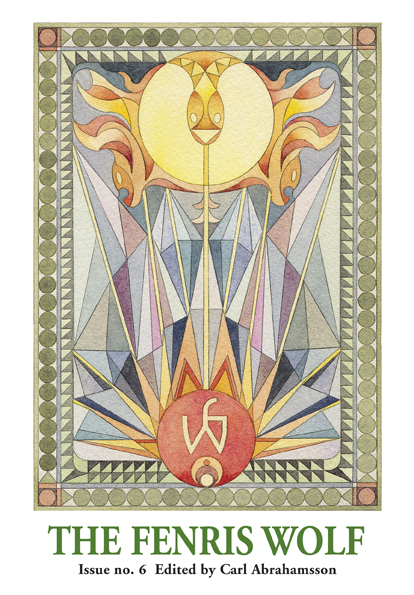 The Fenris Wolf, issue no. 6, has now arrived and is ready to rock and roar! I don't think I've ever been this proud of an issue actually. It's a veritable occultural smörgåsbord, saturated with nutritious thoughts and ideas that will hopingly inspire on some level. THANKS to all the contributors who've made my arduous task as editor such a pleasant one.

First of all I should mention the amazing cover painting by Fredrik Söderberg. Another beautiful mind-boggler! And then what? Hold on tight: The sixth issue of The Fenris Wolf touches upon topics as diverse as occult London, Tantric quests, rune magic and neurology, Cannabis and magic, LSD, entheogenic influences on culture, the Mega Golem, Aleister Crowley in China, Bogomil Gnostics, decadent French author Josephin Péladan, the birth and death horoscopes of the Great Beast 666, Liber AL vel Legis, the psycho-sexual surrealism of Hans Bellmer, healing, death, the extraterrestrial origins of language, Ernst Jünger’s psychedelic approaches, recent Satanic cinema, the occult potential of contemporary physics, “Babalon” as a magical formula, the mystical art of Sulamith Wülfing and a never before published poem, A Litany of Ra, by Charles Stansfeld Jones a.k.a. Frater Achad. And more...

To order a copy of this book, please go to Edda's homepage.
Upplagd av Carl Abrahamsson kl. 23.6.13 No comments:

Turn on, tune in, read a book!

This past week, I've received two really excellent books dealing with one and the same phenomenon. Namely, the distinguished scientific mind of Swiss chemist Albert Hofmann and his discovery LSD. Dieter Hagenbach & Lucius Werthmüller's Mystic Chemist, a biography, and Hofmann's own anthology LSD and the Divine Scientist, work wonders as two different keys to the same lock.

Hofmann's own little book is compiled from late life lectures he held within academia and it's thereby pretty basic stuff. It must have been a challenge like a two-edged sword for him. On the one hand, trying to convince the acid renegades of the 1960s to listen to scientific reason and on the other trying to convince rational scientists to listen to the cosmic and divine poetry of (inner) nature. Did he succeed? Well, certainly more than most.

There is much talk of serendipity in this book, and I can think of no other term that sums up Hofmann's life and career better.

"When the accidental discoveries in pharmacological research are examined more carefully, though, it becomes apparent that they usually have nothing to do with pure chance but rather with what we call serendipity."

"I had been looking for a circulatory stimulant and discovered a psychological stimulant: serendipity."

Hofmann explains this phenomenon that helped him not only in his LSD development and research but also on a general level: "... a researcher's secondary paths of investigation often lead to more significant results than the primary paths that were established on the basis of planning."

This is a well-known magical technique of course. Applied on one's own general life, it can work wonders too. When the mind is clinging to mere rational pushing, nothing much happens. But if it's diligently focused on achieving some kind of realistic change and that mind frame takes over in what is nowadays called a "flow", synergetic gifts will follow.

"I attribute absolute highest importance to consciousness change. I regard psychedelics as catalyzers for this. They are tools which are guiding our perception towards other deeper areas of our human existence, so that we again become aware of our spiritual essence."

Hofmann was never an overt LSD missionary, but rather a proud messenger of the gods and a fine diplomat in-between these too biased mind frames: the wild one following in the trails and trials of Tim Leary, and the subdued, causal one in the global scientific world. Hofmann's own persona showed that it was absolutely possible to merge these apparently diametric angles. He was the perfect PR-man for his own creation, so to speak, armed with a very simple message: "The ultimate meaning of life is happiness."

An avid and enthusiastic naturalist who wanted to see (and saw) connections in between everything and everyone, Hofmann early on realized that his discovery of LSD could help others see these same connections. He integrated outer as well as inner nature, and thereby created genuine holistic perspectives that 18-19th century rationalism had tried so diligently to destroy. The first half of the 20th century brought cataclysmic results of that kind of primitive scientific thinking, and Hofmann was very much aware of it. The relationship between and the coincidence/dance time-wise with the atomic bomb and LSD has been much pondered. Which phenomenon is truly "stronger than a 1000 suns"?

"Even the brain's functions are nourished by the sun's energy, and thus the human mind represents the most sublime energetic transformation of sunlight. In other words, research in the natural sciences has revealed that we human beings are "sun beings" – a truth represented in many myths."

Mystic Chemist is a grand tour of Hofmann's fascinating life and career. The book is well researched, substantial, filled with an abundance of images from his entire life and thereby constitutes an intelligent summing up of a mover and shaker whose impact on human culture we have yet to fully discover. The past decade's re-emergence of LSD within therapeutic and clinical, psychiatric environments show that there's surely more to this phantasticum than meets the (third) eye – or cheap sensationalist media.

Furthermore, Mystic Chemist is a well needed addition on the English reading market. The German sphere has had an advantage for a long time when it comes to LSD literature, so when two beautiful books like these see the light of day in English, it's a valuable addition to a global, elevated psychedelic scholarship. 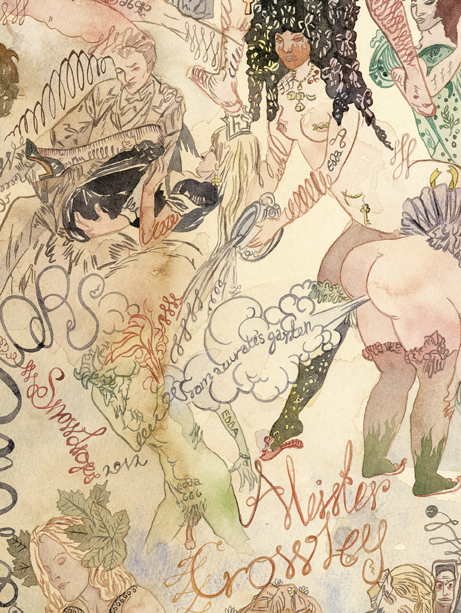 Edda Publishing continue in their energetic efforts of bringing out early Crowley erotica in new fine editions. This time Snowdrops from a Curate's Garden has just seen the light of day. Illustrated by Fredrik Söderberg and edited with an introduction by American sexologist Vere Chappell, this new edition is lavish, luxurious and filled with literary spunk... A nice and clean edition of a very dirty book, one could say.

"While at his Scottish retreat Boleskine in 1903, Aleister Crowley decided to amuse his wife Rose and their friends by writing pornography – one new section each day. He concocted a tale that managed to be marvelously creative and utterly repugnant at the same time. No taboo escaped unviolated – sodomy, pederasty, bestiality, necrophilia, urolagnia, and coprophagia all figure prominently in the text. The protagonist is no less than an Archbishop, incorporating the grand tradition of anti-clericalism which had been a feature of popular pornography for centuries. Many contemporary figures were also made objects of satire, although they were also rendered “nameless” by the use of elision, or omitted letters. The overall result is more absurd than obscene, owing more to Cervantes, Rabelais, Sade and Apollinaire than to the run-of-the-mill pornography of the time. Writing a chapter a day, in the evenings Crowley read it aloud to the audience assembled in the household, with the exception of his Aunt Annie. Reportedly this had the intended effect of amusing Rose, and doubtless the rest of the party, especially since some of them and their old friends from Paris were featured characters. Poor old Aunt Annie even ended up having a role in the tale." (Vere Chappell, from the introduction)

Published 2013. 208 pages, 148 x 210 mm, hardbound with dustjacket. Limited to 418 hand-numbered copies (Standard Edition). The first 43 copies are hardbound in a Half French binding and come in a slipcase together with a signed silkscreen print by Fredrik Söderberg (Limited Edition).

You can buy the book straight from the EDDA PUBLISHING web site.

We have very few copies left of Crowley's White Stains, also available through the web site. If you haven't done so already, order one today together with your copy of Snowdrops. They'll enjoy each other's company in your bookshelf!

Psychick gig bliss up a head!


It's never too late or too soon to look back and enjoy the past. Especially when it deals with future, as it does now. On June 29th, White Stains will resurface after a 20 year hiatus/hibernation. This in order to celebrate two specific projects: White Stains' 1990 album At Stockholm and Cotton Ferox' album Wordship (2004). Is there a common denominator? Of course. We made these albums together with Genesis Breyer P-Orridge – a living legend if there ever was one.

As we enter the stage at Nefertiti in Gothenburg on the 29th, Genesis will be with us. Not to make specific renditions or versions from our two albums, but rather to encourage and celebrate the atmosphere they contain. Very likely, we will surf on this wave of recurrence/resurgence to make a third album too. It would be stupid not to.

Late 1989, I organised a small spoken word tour for Genesis in Scandinavia. We had also already planned to record some of Gen's readings in a studio setting. As White Stains had just integrated sonic wizard Thomas Tibert, who had his own studio, everything moved on pleasant automatic. Gen read his poems perfectly – most of them were recorded on first takes – and when we later made the music for the poems it was like hand in glove on all levels. With textual material like that and a reading that smooth and professional, it's very hard not to make history.

Other adventures then intervened, as they usually do. But in 2002, it felt like it was high time again. As Genesis was coming over to do a lecture on his work at experimental music centre Fylkingen in Stockholm, Tibert and I prepared new music (then as Cotton Ferox) and it was bliss all over again. The result was released in 2004 in the form of Wordship. Some of these vocal recordings had also been used on Cotton Ferox' debut album First Time Hurts in 2002.

Someone as versatile as Genesis must surely have a hard time with projections from others. Is Genesis an (oc)cultural engineer, an industrial music pioneer, a collage artist, a philosopher, a magician etc? Well, of course, all of these and then some. But there is one all-permeating quintessence that is unmistakeable. Genesis is a poet. This is what fascinated me in the beginning of our friendship, and it still does. That's why it'll be an honour to share the stage with Gen and celebrate his/her poetry and the bizarre music that Tibert and I have concocted over the years. They go well together.

The performance will be neither "industrial" nor "electronica" nor "spoken word" but rather all of it in a colourful and quaquaversal mix created to make emotional jump cuts and possible existential mutations. It will be a grand old time spanning from ancient history to the distant future. I hope you'll be there together with us at Nefertiti in Gothenburg on June 29th, 2013, on this exciting adventure.

MORE INFO AND TICKET SALES HERE. BE SMART AND GET YOUR TICKET NOW.

PS. You can buy all of the above albums at the iTunes Music Store. By buying the albums instead of illegally downloading them, you help us in the process of making and releasing new music. Thank you.

I should also mention that the concert is the public final event of a four day conference/symposium at the University of Gothenburg dealing with esotericism, occultism, alternative health movements and many other interesting things. Please consider taking part in this too!

"In the beginning there were White Stains." (Genesis 23:1)