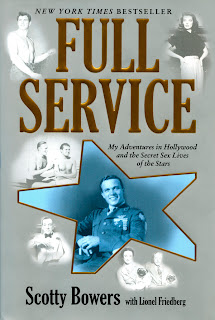 Scotty Bowers arrived in Los Angeles right after World War 2. As a young ex-Marine that survived the mayhem of the battle of Iwo Jima, he was determined to live life to the fullest. Armed with a ”healthy” libido, he did just that. Starting out as a pump attendant at a gas station on Hollywood Boulevard, he was soon picked up by gay Hollywood actors and studio workers. Ever happy to make a buck and satisfy his customers, Bowers also extended his services to helping others get their rocks off. Never pimping – ie, never charging for his sexual match-making services – but always connecting successful Hollywood people with young men and women who couldn’t seem to make their ends meet.

If this sounds like just another sordid tale of a post-WW2 California life of vice, it very soon turns out to be a larger than life sexual fairytale. From the mid-40s and up until the Aids-scare of the early 80s, Scotty Bowers was the person to see when you needed quick and reliable sexual connections. We’re not necessarily talking about Hollywood Babylonesque depravities (although there’s plenty of those too in Bowers’ book), but mainly sex-starved and often closet-contained gay and straight people out for carnal kicks.

Bowers soon became an almost mythical character in Los Angeles, catering to all tastes when making himself available. His little black notebooks of possible connections helped satisfy Hollywood people and other celebrities year after year after year. Bowers himself has always taken pride in the fact that he never charged anyone for arranging sexual encounters. His own money was made from bartending and his own ”tricking”. His willingness to help others has been phenomenal (pathological?). He even inseminated wealthy childless wives simply because he was asked to, and later on posed no questions, as agreed. Accomodating the sexual desires of others have kept Mr. Bowers very happy, it seems.

It’s remarkable that this mind blowing book is published while he’s still alive – 88 years old this year. The main reason that this is possible is of course that most of the people he writes about are dead. He seems to be the last man standing from that promiscuous era. Tennessee Williams once wrote a novel about Bowers and his legendary services but scrapped it on request of Bowers himself. 2012 seems to be a more appropriate time for these tales. As a companion volume to Kenneth Anger’s Hollywood Babylon books, Full Service is absolutely without parallel or match.

What’s the fuss about then? Well, the public image of Hollywood stars as healthy, wholesome and heterosexual is quickly smashed to smithereens. The studios’ PR people must have had a lot to do to keep naïve movie-fans from suspecting what was really going on after dark. Especially as many of these stars were also sexual ”stars” expressing what Bowers frequently calls ”healthy” libidos.

But life for Mr. Bowers has been made up of more than tricking and setting up dates. His many friendships and his apparent empathic lifestyle early on made him a part of Hollywood life and culture. Not merely on a level of gossip and carnal encounters, but also in altruistically interacting with quite often dysfunctional people. It was Bowers who convinced Néstor Almendros to take his nomination for an Academy Award for best cinematography 1979 seriously, and who actually drove Almendros at break-neck speed to the actual award ceremony, where he could pick up his Oscar. It was also Bowers who helped Linda Lovelace give highly paid ”lectures”, teaching Hollywood wives in their autumn years how to do what she did so well in ”Deep Throat” (slightly earlier attempts in strictly gay crowds reversed the situation – the attendees gave Lovelace more advice than the other way around). Bowers also persuaded King Farouk of Egypt to lend his enormous collection of pornography to Alfred Kinsey, in the professor’s ever expansive research of human sexuality. He also set Kinsey up to watch as young people from various sexual persuasions expressed their ”inclinations”, completely uninhibited. Enjoyable research, I’m sure!

Charles Laughton seems to have been the overall most depraved of them all, and James Dean, Montgomery Clift and Roddy McDowall the most unsympathetic. Considering Mr. Bowers’ general easy-going attitude and enormous tolerance of kinks and quirks, these last three must have been truly horrendous people.

Just like Kenneth Anger’s books, Full Service puts one’s own movie-watching in entirely new perspectives. Another similarity with Hollywood Babylon is that Full Service is not a literary trip at all. No ornaments or stylistic tricks of seduction. The book is a very basic recounting of an incredible life in an incredible era and in an incredible place. Occasionally, however, Bowers drifts into theoretical discourse. In a passage on Noël ”Master” Coward, he digresses quite eloquently: ”When it comes to sex every single person is different, but those differences are usually so slight, so subtle, that unless you’re really tuned in you can overlook them or not even be aware that they exist. Good sex is all about how much is too much, how little is too little, about that thin dividing line between consistency and variety, between meeting the expected and surprising with the unexpected. It is about that delicate moment of touch in exactly the right place at the right moment to heighten the experience, to create a sizzling electrical charge that permeates the full body from head to toe.”

And occasionally there’s also a wonderful sense of dry humour involved. Bowers on John Holmes, who did anything with anyone for money: ”Drug dependency, the demands of the pornographic industry, and a lack of inherent intelligence were an unfortunate combination.”

Full Service gives us a lubricated insight into what was really going on, at least within some circles of Hollywood life. It proves, yet again, that fact is often a lot weirder than fiction, simply because people are a lot weirder than temporary moralities make them out to be. Scotty Bowers deserves massive credit for sharing these... Uh, intimate memories.

Bloody good on the whole 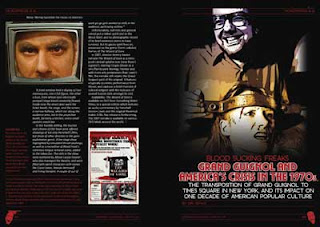 UK based publishing house Headpress is doing a good job spreading odd subculture to the masses. Their books are beautifully produced and thematically relevant in a contemporary terrain noir, dealing with eccentric people (a review of their phenomenal Eccentropedia is forthcoming here), movies, politics, pornography and many other subjects in an intelligent and eloquent manner.

The backbone of their operation is the magazine/anthology Headpress. The most recent issue is version/issue ”2.6” and it’s as good as any of the previous ones. About half of the issue consists of a Grand Guignol special, followed by articles on Philip K Dick and the Germanization of high culture, Cracked Magazine and interviews with Adam Parfrey of Feral House and V Vale of RE/Search.

One could argue that this is all ”old hat” and that it has been delved into many times before. Headpress and its headpressers do something intelligent with it though: they produce nice books that will last and that are a joy to read. Good material can – and should – be regurgitated for new generations, as the attention span of kids these days seem to be on par with the time it takes to say ”Game Over.” Parfrey, Vale and Dick should be presented again and again, over and over, so that youngsters are continuously encouraged to look them all up.

The Grand Guignol special brings back memories of my own puerile youth, in which gore films were a crucial part. The emphasis on the film Bloodsucking Freaks (Joel Reed, USA, 1976) makes me remember how much fun it was to do hazy all-nighters with second generation VHS tapes, filled with non-existent narratives, bad acting and plenty of splatter. I doubt that I would watch Bloodsucking Freaks again today though – some films are undoubtedly best just remembered.

The Grand Guignol section ambitiously delves into the history of the famous French theatre and also presents newer theatre companies and their efforts to keep this tradition alive and well (bad pun!).

Despite its gruesome cover (that has to be admired for its decidedly non-commercial attitude), Headpress 2.6 is a genuine pleasure to read. It carries on a tradition of highbrow sleaze culture, and it’s all done in the best possible ways: intelligently, elegantly and, not at all least important, in book form.