Real books will rule the techno-zombies

Quite a few people ask me why it's relevant to publish books today. If I were to answer that honestly there would be much criticism of my supposed conservatism and of a lack of understanding the technological platform-possibilities. But it's not that I lack an understanding that's the crucial and slightly heretical issue. On the contrary, I understand the situation perfectly. It's that I choose to act according to what I prefer, based on an evaluation of existing experience – my own. I prefer books to techno-reading to the point where I go against the grain and not only read but also publish more real books.

I have yet to come across one individual who actively spends his or her time fervently seeking out new inventions and platforms on the internet or in new gadgets and make choices based on that. And if they exist, they are professionals paid to do it. But the rest of us consume (that is, are force fed) what's offered on platforms that are new, improved and faster, and we're sort of trapped between realizing the greatness of what's new and that we're not being offered a real sense of choice. It's just basically more of the same in an endless river data-Styx that we have to adapt to in order to escape total ostracism.

A book, however, is all signal and no noise. You're in an intimate relationship with your book in a way you can never be with an e-reader, for instance, in which the thoughts and emotions expressed have been deconstructed into mere data that we can fidget about with. But that's hardly an empowerment for the reader – rather a fragmenting distraction.

One sales point is usually how many books you can carry with you at any time in your little electronic thing. How convenient, but I think and hope most people still prefer to be engulfed by one book at a time. Why a suggested need of carrying thousands of titles that you can flip through mindlessly at your "leisure"? Altruism or enforced peripatetic programming?

The analogy to music "consumption" is perhaps apt: Artists used to put together homogenous albums of their new endeavors, as a totality of what was going on in their minds, in the recording studio or live. Today, technology has split the bigger picture into minute parts, tracks and single songs to suit lifestyle-moodish playlist challenges.

Will that also be the case with books? Will readers skip and skim, and digitally flip through a book because technology facilitates it? Yes, I think so.

Now... You'll probably expect a tirade of how awful this is and how I think everything new and technological is evil and should be banned. But you won't get it.

The real heretical beauty of this situation is that books will actually become even more highly prized, more cherished and appreciated – by a certain few. They will be read with greater zest than ever before, simply because our contemporary culture and lifestyle dictates the exact opposite. Never before has stratification been so apparent in human history. What apparently sets people free is also what enslaves them in the most brutal possible way. Why? Because a fragmented mind is unable to make intelligent and wise choices. Multiply the scenario by a couple of generations brought up on genetically manipulated food and attention span-decreasing technology and you have a pretty accurate overview of the impending apocalypse. Which will, of course, be both televised and streamed.

But, again, those who are smart will continue to read books and will thereby get the bigger picture. How you act when you see the bigger picture is of course up to you. Many of you will likely go empathic and altruistic and go on religious pro-book crusades. Good luck to you. Me, I think I will prefer to cater to the tastes of the dedicated few who appreciate an amalgam of intelligence, wit and learning within the covers of a real, tangible, dear old book. I like those people. And I respect them because they will be the movers, shakers and rulers of the future legions of mindless techno-zombies. 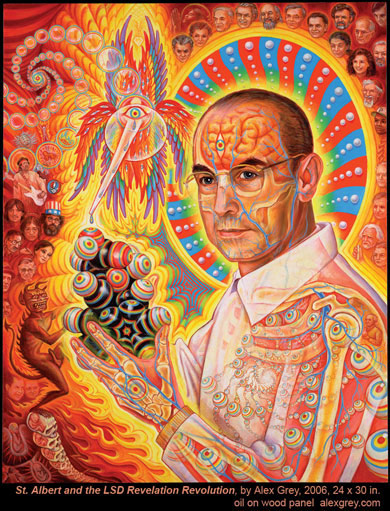 The amazing compilation 70 YEARS OF SUNSHINE was just released on Monotype Records. Cotton Ferox have a track on it called "How about that?" and I'm of course overjoyed and very proud to be a part of this.

The record is a follow-up to the now legendary comp on Silent Records from 1993, 50 YEARS OF SUNSHINE. White Stains had a track on that one so it makes perfect sense to keep on keeping on. Both records are a tribute to the endeavours and results of Swiss chemist Albert Hofmann (1906-2008) and to his legendary illuminated bicycle ride in 1943.

More information on how to order this 2 CD compilation can be found on the Monotype homepage.

Enjoy irresponsibly in all dimensions!