Being a publisher has a lot of considerable drawbacks, mainly that it seems impossible to avoid carrying big boxes of books. No matter how hard you try, there are always new boxes. Or old ones. They will always find you in the end, it seems. But the advantages surely make up for these stressful and sweaty bouts of involuntary exercise.

I recently hauled several boxes of Edda’s latest book, The Fenris Wolf 5, to London and an Edda evening at Atlantis. Me and my fellow Edda publisher Fredrik Söderberg wished hard that we wouldn’t have to carry any boxes out of the store. And our wishes came true, just like in the best of all classic fairytales. It didn’t take long before the books were all out of our care and embraced by our beloved customers. The evening was also the UK launch for our edition of VRIL – The Power of the Coming Race by Edward Bulwer Lytton, superbly illustrated by Christine Ödlund. Books galore! Empty boxes! 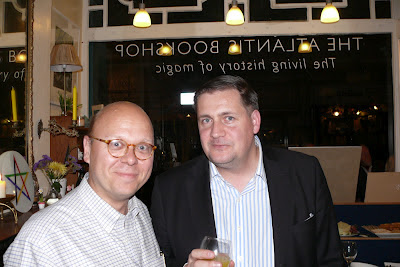 Me and Fredrik: the temporary happiness of knowing that there are no more books to carry.

The Atlantis Bookshop is a classic haven and oasis for a weird breed of people – including ourselves – that enjoys qualitative editions of occultism, mythology, art, psychology etc. Established in 1922, Atlantis is on many levels one of the world’s finest occult bookstores, historically on par with Weiser and Magickal Childe in New York (both defunct) and Fields in San Francisco. To have a launch on hallowed groud like this was of course a joy in itself. To then have a lot of sales and see a lot of friendly faces during this enchanted evening was an extra benefit. 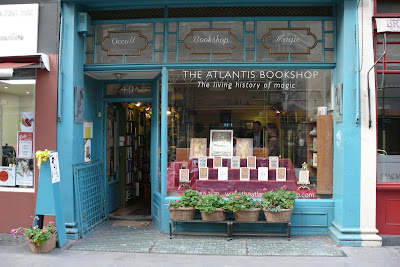 The best window display ever: The Fenris Wolf 1-3 and 5 and VRIL – The Power of the Coming Race.

Old and new friends dropped by and we all enjoyed the environment, the extravagant buffet and each others’ company in very pleasant ways. It just proved yet again that Edda is on the right track and that the material we publish is very well received in a trans-generational crowd of intelligent illuminates.

After a well needed day of repose we traveled onwards to Brighton and our friends Scarlet Imprint’s Pleasure Dome celebration on July 21st. This was a one day festival with talks, film screenings and performances touching upon ecstatic and visionary aspects of occulture.

In a talk called Go Forth and Let Your Brain Halves Procreate, I ranted on about the Mega Golem project (a magical being created out of art) and the need to integrate both brain halves, both rational and irrational creativity, and transcend/transgress comfort zones (yes, even our own!) as a new approach in both art and magic. The talk was well received and I even felt funny (in a good way). That is, people laughed approximately when I wanted them to – a great triumph for me, who often feel so boring on stage that I secretly desire to spontaneously astral project and then kick myself off the stage...

Lovely Alkistis Dimech elaborated on the Babalonic concept and earlier manifestations like Inanna and Ishtar. Levannah Morgan talked about Kenneth Anger’s films and Stuart Inman did the same about surrealism and the occult. Peter Grey continued with a talk about apocalyptic witchcraft, and energetic Al Cummins rounded off the first half with an inspired pouring forth of cut ups in theory and practice.

As we had to drift back to London that very same evening,we missed out on a lot of the more performance-oriented material. But I’m sure the evening became more and more tangibly a ”pleasure dome” as things progressed.

I’d like to extend my thanks to The Atlantis Bookshop and Scarlet Imprint for structuring several reasons for me to leave my desk. I now fully realise that it doesn’t hurt to partake of consensus reality once in a while. Books are great in so many magnificent ways. Getting out there to present and sell the little beasts is one of them. 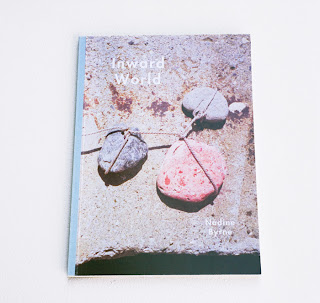 Swedish artist Nadine Byrne recently had a great exhibition in Stockholm. Coinciding with the show was the release of a small book with the same title: Inward World. It's released by Moon Space Books and is definitely a little treasure that should be ordered a.s.a.p. Here's the little text I wrote for it...

Nadine Byrne: Inward World
The intuitive search for existential meaning constitutes one very primal part of the artist’s work. Where to find it? And what is it? We can sink into ourselves, reflecting fragmented shards of life as we sink deeper into the soul. Or we can open our minds and eyes and look at the explosive, energetic outside world, to ultimately find that there’s essentially no big difference between these two perspectives. We still are. We still exist. We still have the ability to express and share.
Nadine Byrne’s work initially strikes me as innocent and pure in its display of seemingly random objects and creations. A set of stones tied together with rope, a walking staff straight out of the forest, elaborate costumes designed to reflect colours from Il Carso rocks in Italy, hand sewn patterns originally designed by her mother, film sequences and photographs of sundazed elements. Byrne’s art appears so silent, sensitive and private. We are allowed inside for a brief moment or two, to take part of an almost childlike joy of poetic exploration.
But when we rest a while and look again, we see patterns clearly. In these patterns, there is movement, development, research, curiosity. Rock, stones and earth become pigments that colour textiles designed for inclusion on photographic negatives and super 8 film. Clay becomes sculptures that appear to bear organic traits, again textile-like with creases and openings. The costumes become full of life when assembled by Byrne’s hands but even more so when worn. We go from elemental, primal, silent over intuitive and creative to distinctly magical and sensually stating. We grow out of nature and reflect its glory and mystery back, seemingly in all directions.
If we accept this intuitive development/direction as Byrne’s creative foundation, we are easily impressed (literally) by the elegance she uses to weave her spells. We can always choose to stay on a formal level and partake of the beauty that she has molded entirely by herself (with a little help from Mother Nature). Or we can delve deeper into the existential sphere and regard her work as some kind of organic proto-art: totemistic, magical, spiritual… When natural items are restructured, there is always an underlying meaning, whether consciously known or not. Again, we are welcome to look and wonder/wander but there will never be any easy answers. We become spellbound and curious victims, not of arrogance or reference but rather of sheer poetry.
Nadine Byrne and her inward world is as nature itself/herself: faint, sometimes evanescent, mysterious, dreaming, beautiful but always challenging, always defying logic and preconceived notions, always enchanting and always leaving you wanting more.

Silver Apples: I hear Fats Domino in everything I do 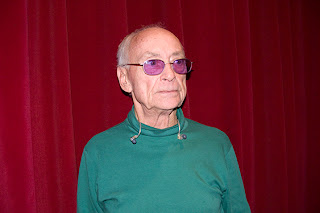 John Duncan: The properties of sound 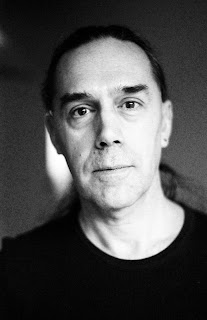